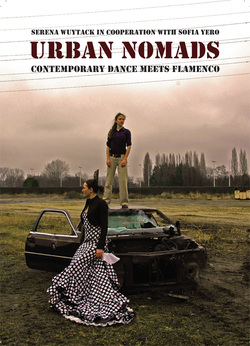 A deep fascination for the tragedy of the present ‘urban nomads’  has driven modern choreographer Serena Wuytack to go into dialogue with the age-old flamenco tradition.

'Flamenco moderno' has incited the birth of the new dance-language of Urban Nomads.

Urban Nomads is hence a dialogue between two dance traditions and two generations.
Serena Wuytack is intensely taking up a physical dialogue with flamenco-icon Sofia Yero. The explicit  lines of the stormy
'flamenco moderno' collide, are transformed and burst out into a dynamic and organic modern dance.
Continually moving, continually on the road …

Are we free or are we expelled?

Urban Nomads is ‘the conservation of the body’ between two women exploring the world in which they live. It is a dialogue about being on the road, leaving behind and rediscovering. It tells about being a nomad in a world where migrations are the main characteristic.

The dialogue between the two dancers echoes in the music. The powerful rhythms and melancholic melodies of the flamenco melt together with modern soundscapes. A bridge is built between tradition and modern society. Now and then clashes still divide the gang of the tradition and the gang of renewal. But eventually modern society with people constantly moving about in a feverish quest, forms the basic inspiration for the rhythm of the music. This rhythm , as in flamenco, is a mirror of the emotional questions
innate to today’s  mankind,  throughout the dance.